I love the snow! Ever since I was a child it was so exciting to have a free day where school was cancelled and we could go out on an adventure. We would sled ride, make snow forts, and play until we were forced inside because we couldn’t feel our hands.  Then Mom would give us special treats like Tomato Soup and Grilled Cheese sandwiches.

Now that we are adults it’s  different. There’s still a buzz around a snow day because it gives me a chance to slow down for a bit. We socialize in the neighborhood, play in the kitchen and fix our favorite comfort foods. My thing is soup, Steve dreams of roasting large hunks of meat.

Last week we were caught in the winter storm that engulfed the East Coast. Thankfully this happened over the weekend, the snow started on Friday afternoon and continued into Saturday night. I was scheduled to be at my brothers in Houston but in anticipation of the snowstorm the airline shut down, canceling my flight so I was snowbound with my darling husband.

What is the best thing about a snowstorm? No one is going anywhere in 30 inches of snow over 36 hours so this is a great way to socialize with the neighbors and I can stay in the kitchen as long as I please.

The snow started on Friday afternoon and by Friday evening we were cocooned in a winter wonderland. We snuggled in, just the two of us for dinner and a movie.

Saturday morning brought more snow.  Steve fixed us a beautiful breakfast when I started my soup. Making soup has to be my favorite weekend activity. It’s the perfect lunch for me, it’s healthy and the neighbors love it. I started by dusting off one of my favorite recipes from the archives: Lima Bean Kale and Ham Soup by pulling all of the ingredients from the freezer.

On Saturday Night the neighbors came over for Steve’s feast. Another neighbor invited us over but Steve gets a bit glassy eyed over his prime rib so I had to turn them down. They already had guests coming and so did we.  The neighborhood parties were going full force!

Saturday’s menu was simple but elegant:

over Greens Dressed in Citrus Vinaigrette

Alas, as adults we have responsibilities. Our walks have to be cleared, our cars dug out, and the vent pipes cleared of snow so the heat stays on. Sunday morning the neighborhood came to life with the process of digging ourselves out. Steve got out his snow blower and the rest of the neighborhood was armed with shovels.  The snow gets a bit tiresome after a few days.  Dirt and grime creep in, pet’s use it for the bathroom and when you have this much piles form to clear a path way.  It’s hard to do this in aesthetically pleasing manner.

There was only so much we could do until the plow came down the street. We trudged through the snow, admiring the snow fort our teenage neighbors built, worked to clear a path on the sidewalks and of course, socialized. It was a bit tricky with the timing. Everyone was anxious to finish before the football games began

After our manual labor we were a bit stir crazy so we walked over to the local Irish Bar that managed to open. Braving the main roads was a treat. They were cleared but traffic was slow. We made our way home before the roads could freeze and finished our football evening at home.

Last night the festivities continued at the neighbors down the street, where we dined on a southern dinner of pulled pork, baked beans, potato salad and cornbread. We can’t get the cars out but the guys have no problem getting to the grill…figures…

Now I see a snowplow has finally arrived to dig us out. My car is still covered but today I hope free it from the white stuff. They are calling for another storm later this week and I’m scheduled to fly to to Houston. Fingers crossed I can make it out on Friday. 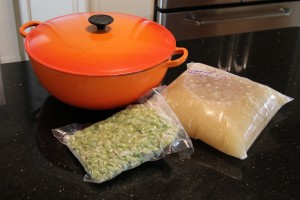 The Beauty of the Braise

The Beauty of the Braise